On the 21st of May, our Year 10 and Year 11 Chinese language classes went to the Chinese Museum.

Students developed their understanding on the history of Chinese Australian’s lifestyle and settlement in the last 200 years. They also learned the cultural and technological development and economic wealth through the remarkable people and great innovations of Chinese Han Dynasty.

Some of the students’ comments about their experiences are below:

On the 21st of May, the Year 10 and 11 Chinese class with Miss Wang and Mr Ding went to the Museum of Chinese Australian History. It was really interesting as I was able to learn a lot about the Chinese immigrant story in the 1800s, prior to the gold rushes. We also learnt about some of the famous inventions of the Han Dynasty, such as the Seismometer. In the underground floor, we were able to experience what it was like to be on a boat from China to Australia during the 17th century. There, we also saw a really long millennium dragon they use during Chinese New Year as well as the Moomba Festival. The weight of the dragon head alone is 200kg and requires eight people to hold it! I recommend this museum to anyone who would be interested in learning about the Chinese lifestyle and culture in Melbourne.

What impressed me the most was the rich-cultural atmosphere of the museum. The museum is divided into four levels. Each layer represents a different topic. The famous sayings of Confucius on level three made me think about our learning experiences. Confucius is a great master of Chinese philosophy. His famous sayings have been passed from generation to generation. There are several copies of his famous sayings in the museum, for example, “to learn without thinking is to be reckless, but to think without learning is perilous.” That means if we read or learn without our own thinking, we will not be able to understand or use the knowledge properly and effectively, even get into confusion. However, if we only dream and do not take genuine study and research, nothing can be achieved eventually, just like building a tower on the sand. 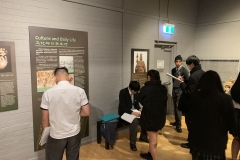 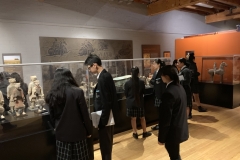 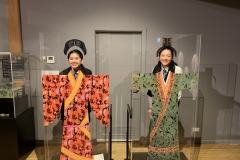 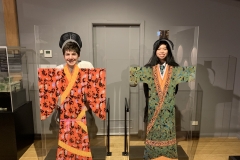 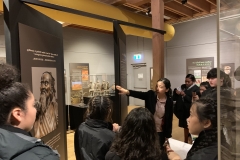 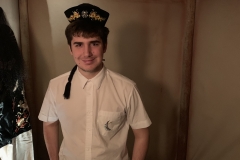 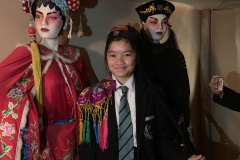 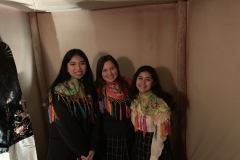 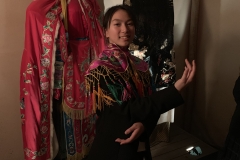 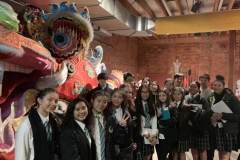 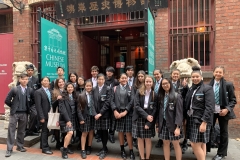 On the 21st of May, year 10 and year 11 students went to the Chinese museum in China town. While we were there, we visited the top level and there was some information about the history of Chinese immigrants and how they had come over to Australia. As well there were ingredients to create Chinese medicine. Basically, Chinese medicine is just the raw version of our pills and each herb cures a different sickness.

After going through that level, we headed to the next and there was Chinese machinery that includes a machine that could detect earthquakes by dropping a ball. And there was a jade burial suit. It was believed that being buried in that suit would preserve the life well after death. There was also information on the Chinese Philosophers like Confucius that people followed.

While walking into the last part of the museum, it was dark. When going into it, we saw what ancient Chinese people wore, such as men had to have long hair or else there was a punishment. We listened to a story of what some people did back in the day, after listening to the story, there was a hallway that was a simulation of being inside a boat, through which we went further into the museum.

There was a place where you shook a can for a few minutes until a stick with a number would come out. You look at the number and look for the paper referred by the number and you would see a paper that relates to your life. When move on, there was a big dragon costume that was very long and lead to the main floor.

I learnt so much from China’s history, nations and beliefs. I believe that the next or other Chinese students should go to the Chinese museum to learn and know more about Chinese culture.

Our excursion to the Chinese museum taught us about the impacts of the gold rush and the potential that other countries saw at the time, we also learnt about Chinese dynasty’s and their impact on Chinese society. When going through the sections of the museum about the gold rush we learnt that to those of a Chinese background it was seen as a great opportunity to start fresh and also utilize Australia’s benefits of being a country of opportunity. The Chinese immigrants also felt as if their skills could be used in the development of Australia and could possible find more work that wasn’t available to them in China. When going through the sections of the dynasty’s and Chinese culture, we learnt about the way Chinese people used to dress and how Chinese women would have their feet bound if they were of a higher class in order to appear more attractive. There was also a lot of information about the Han Dynasty and the different inventions that were developed such as a seismograph and negative numbers. Along with this, we learnt of the importance of the Silk Road and how it made trade to other countries more achievable. As we kept going through the museum we learnt about the different beliefs that were a part of Chinese history such as Confucius who largely influenced Chinese beliefs and customs, as a part of this we also learnt about the Chinese beliefs of what happened after death and how in the past the Chinese would place their dead in Jade armour to preserve them and their soul.

Overall, the Chinese Museum excursion really helped us to understand Chinese culture and history and gave as a greater appreciation for the Chinese language when trying to read the descriptions.

On Tuesday the 21st of May the year 10 and year 11 students that learnt Chinese, received the opportunity to go visit the Chinese Immigration Museum. During our trip we learnt many things, including the different waves of Chinese immigrants that came to Australia and their reason for migrating. We also learnt about the Han Dynasty, their inventions and the Silk Road in which many different countries and states in China went to, to do trading. As we came to conclude our tour in the museum, we went to one final level where we got to experience and listen to the story of a Chinese immigrant who came to Australia by boat. On that level, some of us got the chance to experience dressing up in the traditional clothing for Chinese Opera and we all tested our luck at a type of fortune telling. Finally, there was an extremely large dragon in which we followed to exit the level and finally complete our tour of the Chinese Immigration Museum. Although we did not get to see all the levels of the museum, it will still be an experience that we all had fun and gained a lot of knowledge from, and the excursion will also be a memory that we all will cherish and remember.